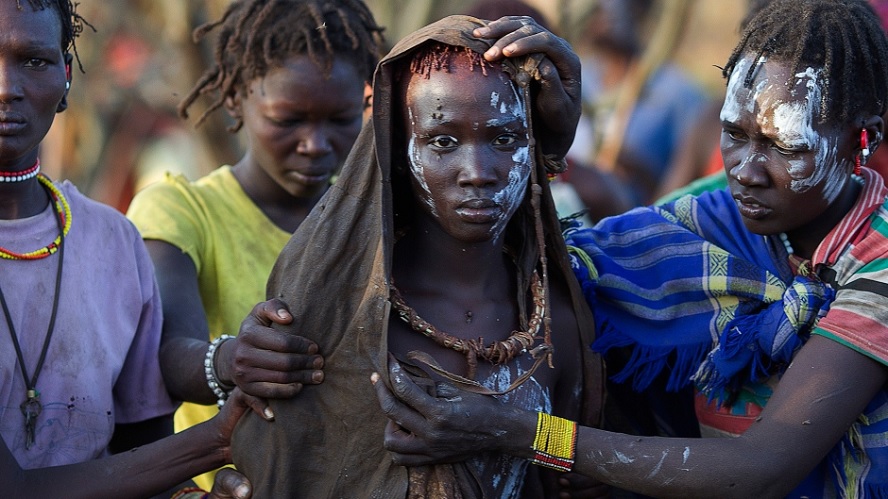 
“I will never forget that day...since that day, my personality has changed and I’m depressed. …I’ve lost my love for this world because of what happened at the hands of people I trusted.”
-Dashty, 32, a woman in Iraqi Kurdistan


When Dashty was 12 years old, her mother told her a guest was coming over. Thinking her friend was coming for a visit, she eagerly awaited their arrival. When the guest finally arrived, Dashty was shocked to see the midwife, a woman whom Dashty recognized. When she tried to lay hands on her, Dashty resisted, prompting her mother to beat her while the midwife held her down, prying her legs apart with a rusty razor in hand. Dashty spent 20 painful days in bed recovering from the operation, one that would leave her traumatized for the rest of her life.

Dashty is a survivor of female genital mutilation, commonly referred to as FGM. The World Health Organization defines FGM as involving the “partial or total removal of external female genitalia or other injuries to the female genital organs for non-medical reasons.” The WHO classifies FGM into four distinct categories. The first type is called clitoridectomy and involves the partial or total removal of the clitoris. The second is excision - the partial or total removal of the clitoris and the labia minora. This is the type of FGM most commonly practiced. The third type is the most severe, called infibulation, the partial or total removal of the clitoris, the labia majora, and the large labia, with the remaining skin stitched together leaving only a small opening for menstruation and urination. The final type of FGM includes all procedures done over the genitalia, such as piercing, pricking, and the introduction of corrosive materials. UNICEF estimates that worldwide, over 125 million women and girls have undergone female genital mutilation in 29 countries in the Middle East and Africa. This accounts for a quarter of all FGM cases globally, occurring primarily in Egypt, Sudan, Yemen, Iraq, and Djibouti. It is estimated that today, 50% of girls who reside in the region will undergo the procedure.

Consequences of FGM on Health and Wellbeing

Though widely practiced, the procedure has no health benefits, rather, it results in numerous short and long-term complications that can be detrimental to the health of girls and women. FGM is often carried out under unsanitary conditions, without the use of professional medical equipment and medications. This increases the risk of hemorrhaging, infections, urination problems, impaired wound healing, and even death. Oftentimes, the risk of HIV transmission between girls is drastically increased through the use of the same surgical instrument for numerous cuttings. The healing process and operation itself are excruciatingly painful due to the severing of nerve ends and sensitive genital tissue.

After the initial cutting, a woman will continue to experience the effects of FGM for the rest of her life. She will be put at risk for chronic genital infections, urinary tract infections, and will most likely experience vaginal and menstrual problems, as well as severe complications during childbirth. Her sexual health and emotional well-being will suffer, due to the compromise of the anatomic structures associated with healthy female sexual function. This relates to the profound negative consequence FGM has on mental health. Many women regard the event as being traumatic due to the pain and physical force used during the operation, as well as the sense of betrayal experienced when FGM is authorized by family and close friends. This ultimately impacts all future intimate relationships a woman develops. Women who have undergone FGM are also at higher risk for psychiatric disorders. A study published in the 2005 American Journal of Psychiatry reports that 80% of women who had undergone FGM in the sample size were diagnosed with affective or anxiety disorders, while 30.4% suffered from post-traumatic stress disorder (PTSD).

There is no doubt that FGM is a violent practice that is both harmful and unnecessary, so this begs the question - why does it occur in the first place? The answer varies from community to community and from culture to culture, however, generally, it occurs because of how deeply rooted the practice is in traditions, social expectations, and belief systems - constructs stemming from entrenched inequality between the sexes. The prevalence of FGM in the Middle East and North Africa can be attributed to the highly patriarchal societal structures associated with countries within the region. These societies are characterized by enforcement of traditional gender norms, resulting in an imbalance of power between men and women. The quantitative effects of these social attitudes can be seen through the participation of women in the labor force in the MENA region, with the Global Industrial Union reporting that less than 30% of women have access to the labor market, compared to 48.5% of women worldwide.

Often, FGM is considered a rite of passage and is conducted in a ceremony when a girl reaches puberty. Some cultural groups see the external female genitalia as being “unclean” or “impure” and have the perception that only once the procedure is performed is a girl considered a “woman” ready to take on a husband. In other cases, FGM is performed to suppress female sexuality. The clitoris is frequently associated with female sexual pleasure and desire, by removing this tissue it is believed that a woman will be less likely to engage in premarital sexual activity, preserving her virginity for her husband. Religion is a common justification for imposing chastity upon a woman in this manner, though no religious text promotes or endorses the practice. FGM has been ingrained in the core beliefs of these communities for multiple generations, making challenging the practice difficult due to societal pressure. If a woman was to refuse to undergo FGM, she would most likely face social stigma, be shunned and isolated from her community, and be unable to marry and start a family.

“Sometimes I feel powerless, angry, and inferior to uncut women. Paradoxically, this was done to me to elevate my status as a woman.” -Anonymous FGM survivor

Eradication of FGM and Impact of COVID-19

In the eyes of those who practice FGM, it is done to benefit women and girls and the potential benefits far outweigh the risks. The brutal manner in which the operation is conducted, often against a woman’s will, is regarded as a form of “tough love” necessary for a woman’s wellbeing in society. This widespread acceptance of FGM makes the practice difficult to eradicate. In North Africa, there are laws against FGM in Egypt and Sudan, while in the Middle East, only Iraq (Kurdistan) and Oman have legislation criminalizing the practice. Though implementing legislation against FGM is a crucial first step towards eradication, enforcing these laws pose a challenge due to the prevalence and cultural significance of the practice.

It is for this reason that experts from the United Nations Population Fund (UNFPA) believe that FGM will only end through collective abandonment, where a community collectively decides to abandon the practice and discontinue FGM as a tradition. This is achieved by prevention programs that systematically target communities by educating women and girls, discussing the health and human rights issues associated with FGM, and gaining the support of elders and religious leaders. However, with the world’s focus shifted to COVID-19 and the ongoing pandemic, preventative programs have either been halted or postponed and sexual and reproductive services are being stripped back. Worldwide lockdowns mean that women and girls at risk of FGM are trapped at home with families and community members who intend to perform the procedure on them. Without intervention or a means to escape, more women will have no choice but to undergo the procedure. UNFPA anticipates that the progress towards ending FGM by 2030 will be reduced by a third due to COVID-19 disruptions and that two million FGM cases that could have been averted will occur over the next decade.

“The COVID-19 map and the crisis with women and girls healthcare is a map of poverty, exclusion, and marginalization,”
-Dr. Ramiz Alakbarov

To learn more about UNFPA’s work in ending FGM or to make a donation or pledge in support, visit https://www.unfpa.org/born-complete. Because every girl deserves to feel complete.

FGM an underreorted issue in the middle east
Why Some Women Choose to Get Circumcised
Female genital mutilation
We still don't talk about it - FGM
FGM facts
Female genital mutilation facts
FGM - MENA
FGM speaking out cut genitals culture of silence
“They Took Me and Told Me Nothing”
Health risks of FGM
Mental problems and FGM
Letter - Scotland FGM
I was forced into choosing FGM as a teenager – today, it still terrorizes my life
Why does FGM happen
COVID-19 impacts on FGM
Equality FGM in the middle east
MENA women make progress in patriarchal societies
Image source
Subscribe to our newsletter