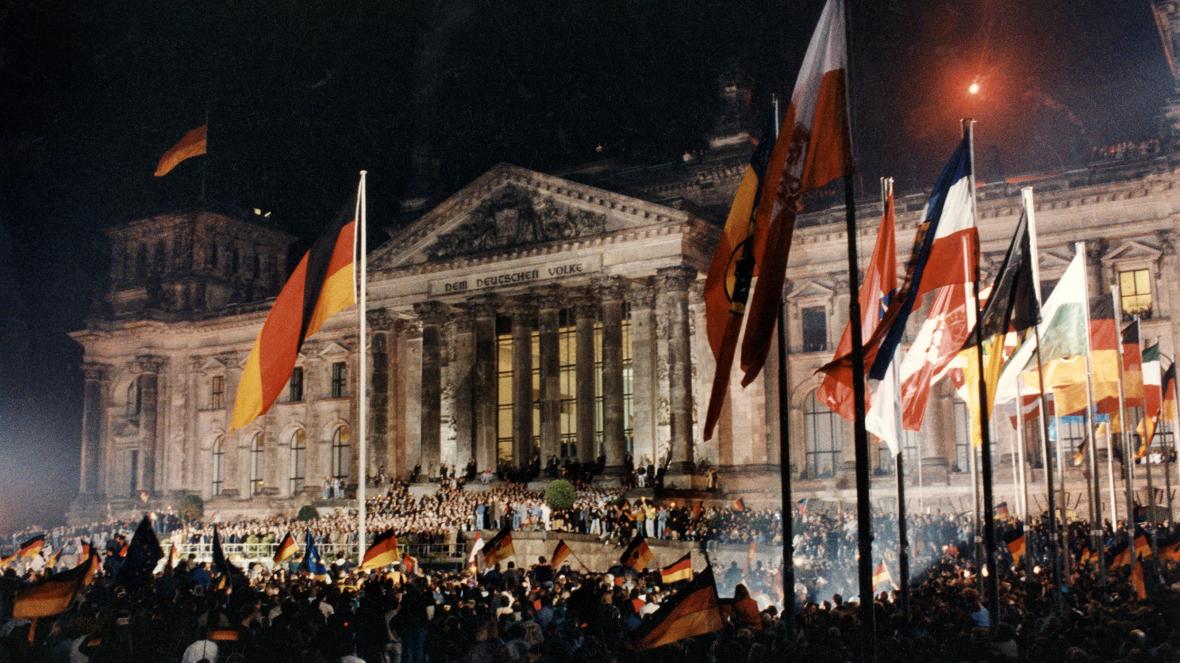 “Germany, an economic and political colossus in the heart of Europe, was reborn today on the stroke of midnight as a single country after more than 45 years of division. More than a million people  witnessed the historic end of two separate German states as the Federal Republic’s black, red and gold  flag, complete with rampant eagle, was brought in by 20 young people from both parts of Berlin and  raised on a special flagstaff in front of the Reichstag, dedicated To The German People”

Thirty years later, the German reunification has been a resounding success as East Germans were freed from the yoke of communism. In three decades, the new liberated Germany has been a steady and pragmatic presence on the European scene. It has championed the expansion of the European Union to the east, including formerly communist nations such as Bulgaria, Hungary, and Romania, and has pioneered the creation of one single European currency, the euro. It has powered solid and constant growth across the continent and, more visibly, throughout the European Union.

As Germany approached the 30-year mark since reunification on Saturday, October 3rd, government officials and dignitaries praised East and West for how both have grown together. But, despite all rapprochement, there is still a significant political gap between the two parts of the country, and this East-West schism shows to this day.

The East-West Schism after the Fall of the Berlin Wall

The narrative that the East turned its back on everything political as a result of disappointments in the 1990s and is, therefore, less interested in politics than the West has been empirically refuted. The East proves that comparatively, low voter turnout is no evidence of political disinterest; on the contrary,  East Germans are anything but apolitical, and they often express their opinions and demands  "unconventionally", as a study by the Center for Social Research in Halle shows.

Shortly after 1990, the level of classical political participation in the East was high, driven by the mobilization of the turning point. But then, as is well known, a historic economic collapse occurred from which the region was not able to recover for a long time. "There is currently no evidence of a turnaround in the East," wrote German newspaper Der Spiegel in April 1991. Millions of people were affected by the collapse of the East German economy and the loss of their jobs. The immediate consequence of the unification crisis was a feeling of injustice. Justice was and is always a central topic of conversation in everyday life. It is frequently combined with the accusation that the life achievements of those who had to spend decades in the GDR are not properly appreciated. In addition, there was the demotion of many working women to housewives, the loneliness of the SED (The Social Unity Party of Germany - Sozialistische Einheitspartei Deutschlands)  victims and other fates. For many people, the social awakening and democratic liberation were coupled with enormous disappointments and great uncertainty. Some of these were shocking experiences that touched almost every family in East Germany.

The common view of post-wall Germany is that what had been presented as a reunification became a de facto annexation. West Germany was only prepared to incorporate the five eastern regions on its own terms; East German social models and structures were considered dysfunctional or outmoded – the  West had all the answers. The people who criticize the reunification often have the feeling that social change broke over them without their being able to help shape it. That is why today if you simplify it,  these two perspectives stand opposite each other: the reunification as a success story and the malicious takeover of the east by the west.

In an interview conducted by “Der Spiegel”, German sociologist and head of the research project "The  Controversial Legacy of 1989" Alexander Leistner offered some insight into how East Germans look back on the reunification; “these are two highly condensed narratives about extremely complex events.  They make history more tangible, but in some cases, they also reflect individual experiences. As early as the 1990s, negative terms such as crisis, bankruptcy, and even colonization appeared in connection  with the fall of the Wall, even from people whose existence was damaged by reunification.”

Regarding why many people still find it difficult to understand the fall of 1989 as a complex historical process that simple explanations do not do justice to, Leistner believes that “simplifying narratives get caught, also in terms of politics of memory. In reunified Germany, efforts are still being made to overload 1989 as an identity-creating moment. In ceremonial speeches and exhibitions in the public debate with the GDR, people perceive 1989 as an act of self-liberation and as a completed process. An extremely shortened narrative, because for many people it was not always a success story, nor was it completed. The individual biographical catastrophes to which the collapse of the GDR led was not recognized for a long time, sometimes even stigmatized”.

What many West Germans fail to recognize to this day: In the West, only little has changed as a result of reunification, in contrast to almost everything in the East. Because of this non-simultaneity, there are completely different memories between West and East.

The empathic West German view is still missing, there is a lack of understanding to recognize that the first experiences with the West German democratic society were not all positive for many East  Germans. Many people in the West still do not understand the shock of the almost lightning-fast transformation that hit the East Germans. To this day, however, one can still hear accusations of ingratitude to the East Germans in the West.

"Midnight Heralds the Rebirth of Germany"

“Many decades of multi-layered history rolled away at midnight when the bell peeled for a new  Germany. It is almost three decades since the building of the Wall, four since the final breakdown of postwar Allied co-operation, five since the first air raids on the German capital and six since Hitler began his political Battle for Berlin. A multitude of walls are being demolished today between divided communities; but it is Berlin which, for the most obvious historical reasons, grips our imagination”  (The Guardian, October 3rd, 1990).

The reunification of Germany signified, for many, a new beginning, a clean slate for Germany to thrive as a single European nation, not a spoil of war for the United States and the USSR. The most renowned symbol of the East-West schism and a key part of the legacy of the Cold War in Germany, the Berlin  Wall, fell quite as unexpectedly as it had appeared. The swift downfall of the German Democratic  Republic was triggered by the visible decay of the other communist regimes in eastern Europe and the  Soviet Union. The liberalizing reforms of President Mikhail Gorbachev in the Soviet Union appalled the GDR regime, which in desperation was, by 1988, forbidding the circulation within East Germany of Soviet publications that it viewed as dangerously subversive. The Berlin Wall was in effect breached in the summer of 1989 when a reformist Hungarian government began allowing East Germans to escape to the West through Hungary’s newly opened border with Austria. By the fall, thousands of East  Germans had followed this route, while thousands of others sought asylum in the West German embassies in Prague and Warsaw, demanding that they be allowed to emigrate to West Germany.

45 years after the split that separated families and siblings, October 3rd, 1990 signified, as it has been put by some, the “rebirth” of Germany and the reunion of the German people. Breaking the barrier imposed for almost half a century and emerging as an economic power on the European continent has been one of the most astonishing achievements of Germany - and one of the most burning wishes of all formerly communist nations.

Once the European Union began its expansion, the geopolitics of Europe changed quite dramatically;  from foreign and internal policy mainly influenced by France, the EU’s policies shifted towards a more  “German” approach. The reasons why this shift happened were due to the relatively recently gained centrality of Germany in the EU, as the enlargement placed Germany at the geographic heart of the Union; furthermore, a centrality has been identified also from a political and diplomatic point of view (Willy Brandt’s “Ostpolitik” is usually cited as the primary evidence that Germany has been at the center of the East-West relations and of the dialogue of the East-West détante). Some are afraid of the “German hegemony”, primarily because of the predominance of Germany in many aspects:  demographic, economic, and financial. Germany has always had a cult of stability and austerity, and it has sacrificed many elements of national pride in order to assume its role as a strong European country (the Deutschmark is one of the most prominent examples, as it signified the post-war success of the  German nation).

Many heads of state feared the unification of Germany; Margaret Thatcher and Giulio Andreotti were openly opposed to the reunification of East and West Germany, while François Mitterrand, although sharing their worries, accepted it as inevitable. Giulio Andreotti is even thought to have said that “he loved Germany so much, he preferred it when there were two of them”.

It is, indeed, a well-known fact that, once Germany was reunited, it held significantly more power and had a much more important say in the European political scene. The fears of the leaders of the most influential countries of the European continent that Germany, now holding as much power as France,  could shape Europe in its own, distinct way, were founded. Now, many people consider that Germany is the most powerful European nation and some even fear the prospect of German hegemony in the European Union. The political and ideological divide between East and West, which has kept Germany and its people apart for the better part of the Cold War, can still be felt nowadays, as the German nation bears to this day the painful scars of communism. However, many argue that the willpower of the  Germans and their ironclad determination has greatly contributed to overcoming the chasm between East and West during the last 30 years. Dividing Germany has always been seen as a political weapon to prevent the rise of another influential state in Europe but, despite all efforts made towards turning Germany into a second-tier nation in Europe, we are now witnessing the indisputable predominance of  Germany in numerous aspects in European politics and geopolitics.

Was Germany truly reborn that night? Has Germany risen from its own ashes or is it simply reminiscing upon its past glory? Only time will tell, but the story of East and West becoming one again after almost half a century of communist influence still resonates throughout the Eastern, post-communist nations who are still struggling to overcome their complexes. The enlargement of the European Union has offered former communist nations a chance to follow in the footsteps of Germany - but is Germany’s post-communist story one of success or is it rather still a tale of divide?