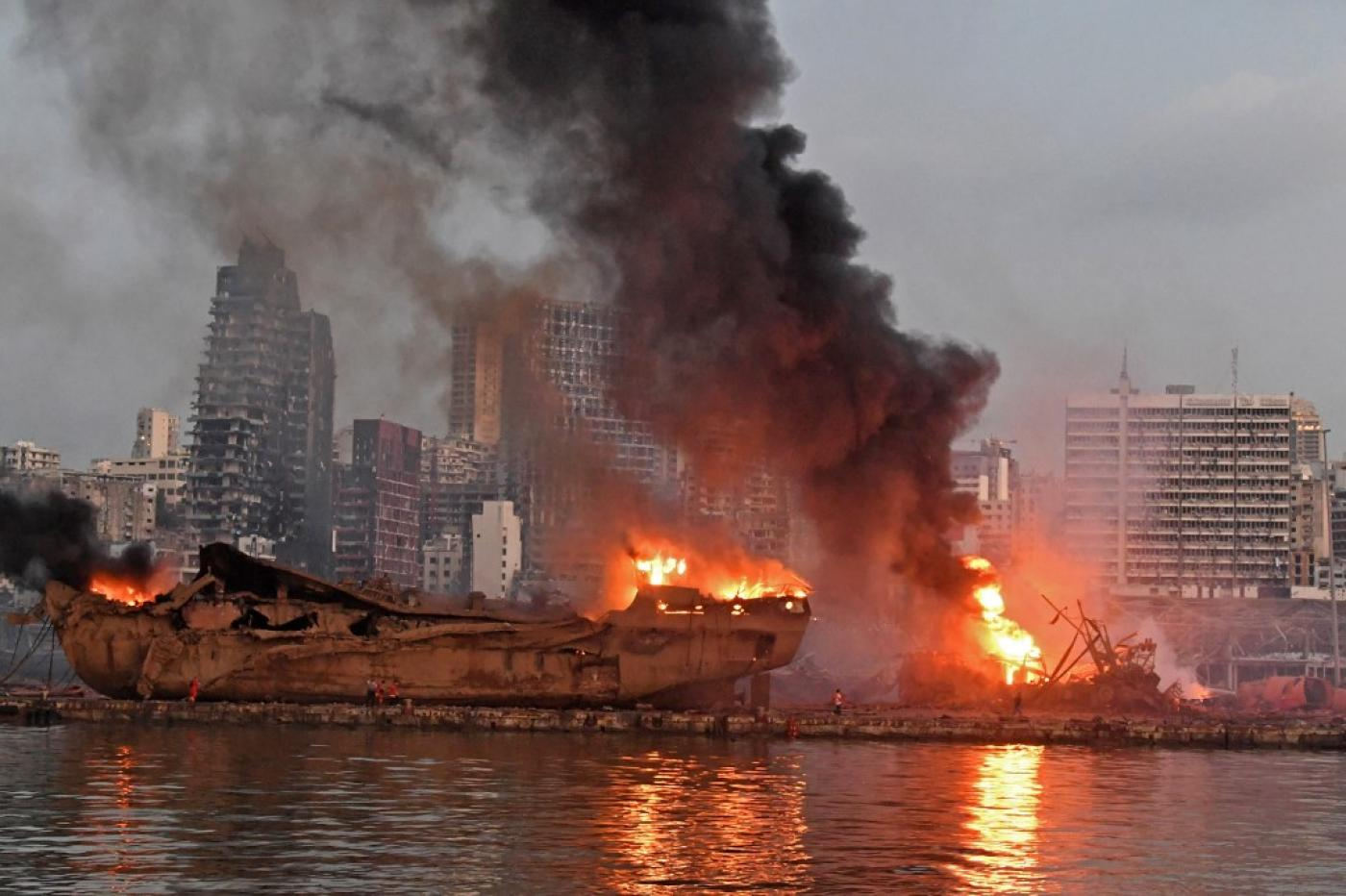 ﻿On August 6th, 2020, a massive explosion ripped through the Lebanese capital of Beirut. Over 200 people were killed and thousands of others were injured. Lebanese authorities have since stated that the blast was the result of the detonation of 2,700 tonnes of ammonium nitrate that was stored unsafely at the Port of Beirut. The explosion destroyed thousands of homes and buildings and has left the nation in shambles. It demolished at least 26 hospitals and clinics, 170 000 apartments, and 120 schools that are attended by   50 000 students. Apart from the devastating human cost, it destroyed the Port of Beirut which accounts for 80% of all imports into Lebanon. It is the main way that food, medicine, and goods get into the country. The port is also of extreme economic and logistic importance as it is connected to 300 other ports around the world and generates over 250 million dollars in fees alone. The port was also next to the Lebanese strategic grain reserve which held three months' worth of wheat for the country. The damage to infrastructure that the blast had, has devastated the already crumbling Lebanese economy while also having dire effects on the health and wellbeing of the Lebanese people. The United Nations warns that the situation could turn into a humanitarian crisis if food and medical equipment are not delivered immediately. In the aftermath of this devastating event, public outcry, and a massive loss of confidence country-wide has led to the resignation of the government. This is the second government to leave office this year after mass protests led to the removal of Saad Hariri’s government in January.

Protests have erupted in the wake of the explosion, but the Lebanese people have been protesting since long before. They have been protesting for years against the corruption and negligence of the country’s leaders. This is just considered to be the latest in a long line of incidents that have resulted from the irresponsibility of the Lebanese government, shattering public faith in the future of their country and any reform. Within days of the blast, there were tens of thousands of people who took to the streets to show their frustration with the sectarian government of Lebanon. These people are not just calling for a new government, but a new government system. The country’s youth have also begun rebuilding their city, launching internet campaigns to raise funds and fix broken homes and infrastructure. As a result of the deep-rooted corruption, there has been massive inflation in the country’s economy, along with a blow from the Coronavirus pandemic, and now the explosion. This has effectively destroyed the lives of many as a large portion of the population is unable to afford food and basic necessities, and some are so severely injured that returning to work will take time. Corruption is the largest problem in the eyes of the people, it was the largest problem before the blast and is seen as an issue that led to the blast. Many of Lebanon’s political leaders knew that there were thousands of tonnes of ammonium nitrate stored unsafely in a civilian port in one of the most populated areas in the country, and nobody did anything about it. In addition, this is also not the first time that ammonium nitrate has exploded and cost lives, one example being a 1947 explosion in Texas which costed 500 lives.

The main reason why corruption is so prevalent in Lebanon is the sectarian government system which was strengthened by the Taif Accords. These accords were an agreement made to reunite Lebanon and end the civil war in 1989. It divided up power between sect based political parties and this division created a system that was and still is fueled by fear and patronage. The people rely on their sectarian political party to provide them with basic services such as medical care, food donations, and financial donations. This has divided up the Lebanese people, infiltrating every aspect of their societies, even determining if some got jobs or not. Since the state is weakened, for a multitude of reasons, the people who are in need of these services rely even more on their sectarian leaders. This creates an environment in which the public is required in many cases to look past corruption and negligence by their leaders because their lives very much depend on them. It was widely known that these leaders were corrupt, but until around October of 2019 nobody was able to do anything to stop them. That was when taxes went up again, and many felt that their leaders had finally gone too far. The Lebanese bureaucracy wasn’t just massive, but also ineffective. To illustrate, consider a World Bank study from 2005 that discovered that Lebanon required 25 percent more in funds to achieve the same health results as countries that had the best practices. In 2018, Lebanon’s literacy rate was around 95%, further proving that the potential of this country has been strangled by the lack of open and focussed leadership.

The country’s governments and political elite have been condemned for the deep-rooted corruption that has crippled the country. While outgoing Prime Minister Hassan Diab had run on promises to end the corruption, on August 10th he conceded his defeat. The Diab administration was marked with bribery, embezzlement, extortion, vote-buying, and nepotism. In 2019, the Lebanese government was ranked 137th of 180 nations on the Corruption Perceptions Index. Regardless of the political party, there is no regulation and transparency in Lebanon’s political system. While Lebanon has a sectarian government system, there are two major political alliances that are backed by rival foreign powers. There is the March 14 alliance which was formed by former Prime Minister Saad Hariri’s block and has the support of Saudi Arabia and the United States. The other alliance, March 8, includes the Maronite Christian President, Michel Aoun, and his political party as well as Hezbollah. Hezbollah is really just a proxy for Iran to manipulate and cripple Lebanon by draining the country of funds. The March 8 alliance is backed by Syria and Iran. These alliances are often viewed as a way for Saudi Arabia and Iran to grow their influence in the Middle East and a way for them to continue their rivalry and fight proxy wars. Many believe that this is the root of much of the corruption in Lebanon as many of the powerful political leaders use these alliances to grow their personal wealth. Much of the private property in Beirut is owned by either former politicians or people who are close to politicians, this keeps power and wealth within the upper echelons of Lebanese society.

There is a lot of damage in Lebanon that needs to be rebuilt in the wake of the explosion: hospitals, schools, the port, etc. French President Emmanuel Macron was at the head of an international donor conference which raised a total of 252.7 million euros as aid (France has contributed 30 million euros). These are much-needed millions for the immense reconstruction that needs to be completed, especially due to the port's economic significance to Lebanon. However, there are some legitimate concerns about who the money will really benefit due to the country’s long history of corruption. The head of the International Monetary Fund, Kristalina Georgieva, wants an audit of Lebanon’s national bank. She does this with the intention of ensuring that the money will not be diverted from the people who need it the most, the people who could be crushed by debts long into the future if reforms are not made. The purpose of this aid is to alleviate humanitarian issues and to help the people of Lebanon. Rebuilding trust in a future government, getting the people of Lebanon back on their feet, is the best possible use of this money, not blind charity.

The blast at the Port of Beirut has devastated the nation. The general consensus on the matter is that the blast and its horrific human cost was a result of the negligence of the Lebanese government and the people are fed up. For once, the public needs leadership unburdened by the interests of others, to lift the country out of crisis. With the resignation of the parliament, Lebanon’s future is unclear, its economy has crumbled, its currency is worthless, and its resilient people are suffering. The people are feeling abandoned, but they haven’t given up, instead, they are rebuilding their communities together, creating hope together. Looking in from the outside, all anybody can do is help them rebuild, allow the people to choose the course their country must take for them. There are no simple solutions or easy fixes here, but for those who would like to help, we have provided links where you can choose to donate to help those in Lebanon who were affected by the blast and are struggling. Stay strong, Lebanon.

Donate - Help Us Save Lives

Analysis: Diab was meant to fail. He did it well

How will Lebanon ever recover? | Start Here

Lebanon: Why the country is in crisis

Lebanon Must Root Out Corruption to Fix Its Economy

Beirut port: irreplaceable importance in the middle of Lebanon's geography