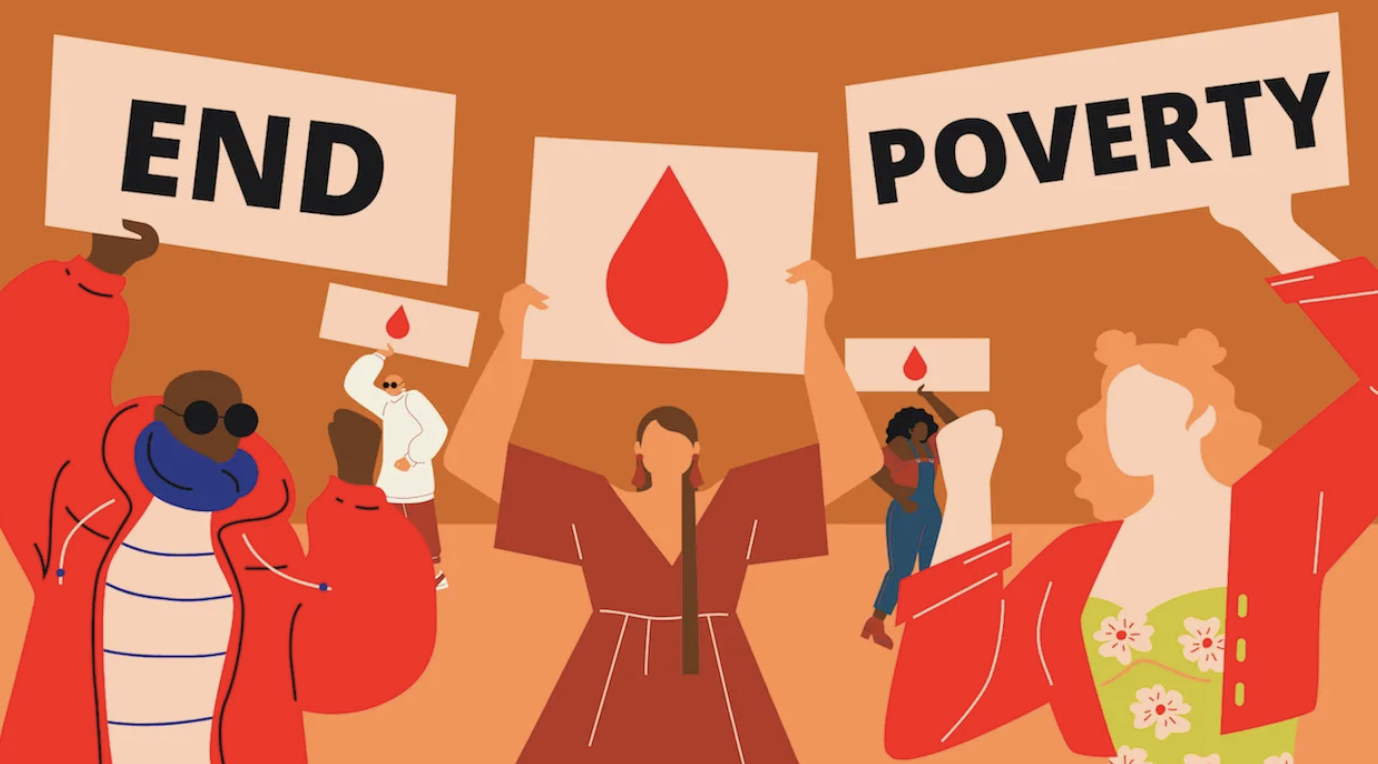 ﻿Women around the world have to go through and worry about an issue that’s specific to them regarding personal hygiene - menstruation. Before the pandemic, period poverty had already been a worldwide issue affecting more than 800 million females to a varying degree of severity, particularly in many developing countries, where the topic of menstruation is a taboo subject. This topic may be a source of discomfort to some as this issue hasn’t been covered by mainstream media. Along with this, society has already conditioned many of us to treat this as a ‘personal’ or ‘TMI’ topic. However, this issue concerns women's fundamental human rights as well as ingrained gender inequality, so it is imperative to step out of our comfort zones for a second to confront this issue.

A general misconception is that period poverty only occurs where there is a lack of menstrual products for females to use, however, this is not always the case. The problem can also occur due to a lack of infrastructure, education, and awareness of female menstruation. The absence of any action and care taken to meet the menstruation needs of females is what causes and continues period poverty.

The period poverty experienced by women in more developed countries is drastically different than women in less developed countries. Many of the countries that have recorded poor hygiene and a low emphasis on menstruation health are mainly situated in sub-Saharan Africa and South Asian regions.

There are generally a few major causes of period poverty, one of them being culture. For some cultures, especially in the regions mentioned above, periods are seen as dirty, a superstitious taboo, and sometimes a misdemeanor. Take Nepal for example, where periods are treated as if they are a disease. When it’s that time of the month, females are shunned from households and given many demeaning treatments including strict social restrictions that are usually at the expense of their freedom and dignity. In particular, there is a tradition called Chhaupadi where female menstruations are seen as impure so they are restricted from doing regular family and social activities, even school. It goes as far as to have to live in cattle sheds or temporary rundown menstruation huts, where they are put into isolation from the population especially the opposite sex. They don’t have access to proper food and water, and live in poor living conditions, without safe sanitation, hygiene infrastructure and products to safely menstruate for the whole duration of the cycle. Although it officially became law in 2005 to ban this practice, in some parts of western Nepal, there are still a few communities that practice this.

The second major cause of period poverty is based around economic standings and poverty itself. People worldwide who live under the basic income line are already struggling to afford basic necessities such as water and food let alone having enough to afford menstruation products. In a survey done in the United States, out of 2000 women, 60% of females have to budget to be able to afford these products and 79% even have to sacrifice some of their basic needs for them. Needless to say, this situation only gets direr in developing countries, where people have to fight for their survival and menstruation is certainly nowhere near their priority list. Additionally, it is one thing to be able to afford menstruation products, and another to pass the threshold of affording good quality products. For many women, it is the saddening mentality of “better than nothing”, where they have to use inadequate substitutes instead of something that will be safer for them. There are specific products on the market that have undergone rigorous research designed to make this process easier and healthier. However, oftentimes these products don’t come at a cheap price.

While on that note, the issue of tampon tax should also be discussed. From the survey discussed earlier, it is shown that women on average spend $13.25 per month on menstruation products. But to this day in some countries, female hygiene products still aren’t exempted in sales tax or value-added tax as they aren’t counted as basic necessities. On the contrary, many products for men are exempted. This still remains a hot topic of debate, even though this clearly serves as a prime case of gender inequality and how women’s health needs are still neglected and undermined.

Another cause of period poverty is the lack of education. While culture plays a factor in creating mindsets about menstruation, the lack of awareness also contributes to this issue. This can be rooted in the ideals of close-minded societies aging back to hundreds of years ago, where menstruation was still a very sensitive subject. It’s not simply the lack of education for young females about their bodies and how to take care of them, how they should feel about them, how to deal with the challenges of being a woman and menstruating. It’s also the lack of education directed towards the general public on the topic of menstruation. There are still many myths and misconceptions being spread on this subject yet very few dare to feel comfortable enough to speak up about it. Countries all over the world are still struggling to recognize the need for more emphasis on menstruation health and giving the issue the attention it deserves.

The amount of effort put into solving this issue currently only offers a temporary solution to provide short term relief without addressing the long term side effects. Females in these situations may earn quick relief from properly taking care of their menstruation cycle each month, but little do they know that they are simultaneously losing some long term potential health benefits. If menstruation is not taken care of properly it causes a plethora of health problems, including(but not limited to), infections in the urinary tract, increased risks of cervical cancer and a decrease in reproductive health. This can occur, especially in areas where a woman’s risk of exposure to other harmful diseases, such as diarrhea and pneumonia significantly increases.

The lack of action taken to address period poverty evidently shows the still existing gender inequality in the world, as well as the treatment females, still receive for simply going through the natural phenomenon of menstruation. Some females feel shameful, disrespected, and devalued by society’s stigmatization of the topic of menstruation. There are countless incidents where females are given fewer opportunities just because they’re menstruating like places in school or work. Identifying as a female myself, I understand just how hard it is every month to deal with it. It takes a toll on you mentally and physically, and just by seeing all these statistics, facts, and incidents, it’s astonishing and heartbreaking to see how much females still have to go through. Especially with having the need to justify to society why this issue deserves more attention, and why we need proper access to the support that we deserve while menstruating. Though I understand that it's very hard to change the cultures that have been ingrained into people’s mindsets for generations, there are still some ways we can stop period poverty.

For girls specifically, when investing in menstruation products, find more sustainable companies that actively donate their profits or products to developing countries or even the homeless shelters. This would be especially helpful in areas that are facing a humanitarian crisis, or even areas that are still recovering from the aftermaths of this pandemic. When you’re in school, show your support for females because we all menstruate and we all understand the struggles. If somebody needs a menstruation product at school, help them out. To go a step further, if you notice that your school or district doesn't provide free and accessible menstruation products to students, start a petition or a movement to get some.  Lastly, it is extremely imperative that we actively work to destigmatize periods. Imagine a world where menstruation products are free or even just more accessible, and females don’t have to spend so much time climbing over this hindrance. It will allow them to spare more money for basic needs. Another big thing people can do is to be supportive and create awareness for this issue by actively reaching out and helping in a respectful manner. We also have to understand the topic of menstruation as well as combat the myths and misunderstandings associated with it to be able to effectively help solve this issue. “You cannot make a change if you stay within your comfort zone.” We are going nowhere with this issue and change will not happen if we’re scared to stand up and educate ourselves.

New research reveals how much the average woman spends per month on menstrual products.

Period stigma undermines women's rights. Why it must stop.